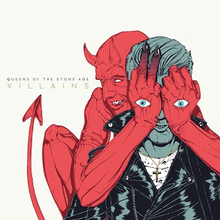 QUEENS OF THE STONE AGE -

Tracks you’ll hear at the bar

Black Rebel Motorcycle Club have been a Belushi’s staple for close to two decades now and have been the meat and backbone to dozen of our classic playlists. Their eighth album doesn’t break any new ground but as far as we’re concerned - thank god! Who wants that? It’s classic BRMC and that’s the way we like it.

Staying true to themselves and steering way clear of the mainstream, as always, Black Rebel hasn’t given any thought to the industry’s growing trend to move in an electronic or synth direction and this album is instead chock full of catchy hooks, churning riffs and charged lyrics.

To still be relevant after almost 20 years is a testament to the band’s ethos and commitment to garage rock. We will say the album could do with one more revved up tune to backup the album’s best track ‘Little Thing Gone Wild’ and revive you from those hypnotisingly rythmic, pyshcedelic guitar trances that drone through Wrong Creatures.